The truth about the trendiest square in Malaga

The Enrique Garcí­a-Herrera square in Malaga is in vogue. Even though its design is rather unsophisticated it is still a cool place to hang around.

The reason for being so trendy is largely due to its strategic location which is exactly between the old and the new city centre. To the west, across the river Guadalmina, is the modern part of the city. Here you will find Spain’s largest department store, El Corte Inglés, many shops and several hotels.

Situated on the south side you will find a fresh food market, the Mercado Atarazanas; on the east side the historic centre and to north Carreterí­a, an old street that is slowly being gentrified.

In short, the demanding consumer finds everything he needs within a five minute walk.

This square is despite its fairly recent refurbishment not exactly easy on the eyes. Which is a shame because the rest of Malaga is slowly but surely turning into a tourist hot spot.

According to an architect friend, this is because the town hall managed this renovation project in house; whilst in the rest of the city centre professionals have been working on the various restoration programmes. For example the harbour, the Roman Theater and the neighbouring area Soho are other recent refurbishments that combined contemporary design whilst retaining the historic value of the site.

Before the renovation this piece of land functioned primarily as the roof of the subterranean car park “Camas”. The exits of the garage are nowadays equipped with white arches, the renovation also delivered some giant triangular planters, in which patchy grass and some trees grow. Moreover, today the square also features a playground, which undoubtedly improves the quality of life in the neighbourhood, but is not aesthetically pleasing.

In short, except for the freshly painted look, it is not exactly a prize-winning design. Even though the plaza lacks sophistication, the concept still seems to draw in people. Whereas the neighbouring Soho project somehow does not seem to get off the ground, the hipster scene is flourishing here. On and around the square are all kinds of trendy restaurants, alternative shops and trendy cafes.

And importantly, unlike the rest of the city, which is now flooded by hordes of tourists, it is still a square for Malagueños. You will see children play, urban youth and the elderly, enjoying some quiet time outdoors.

So if you are not an old fashioned or snobby Roman-Greco-Catholic fundamentalist (like me), in your appreciation of modern design or simply prefer a relaxed functional environment over a museum this is your square.

On the square you will find a fabric store and a bridal shop, around the corner on St. Isabel Pasillo, a herbal business, La Tienda Las Especias and south of the square is the fresh food market Atarazanas.

A little further, to be precise walk 250 meters down the road, lies Calle Carreterí­a, where hip lunch cafés, tattoo parlors, organic food and pawn shops are vying for customer attention.

Furthermore the area has several hotels catering for every budget. There is plenty of choice. To check availability and prices click on the links below: 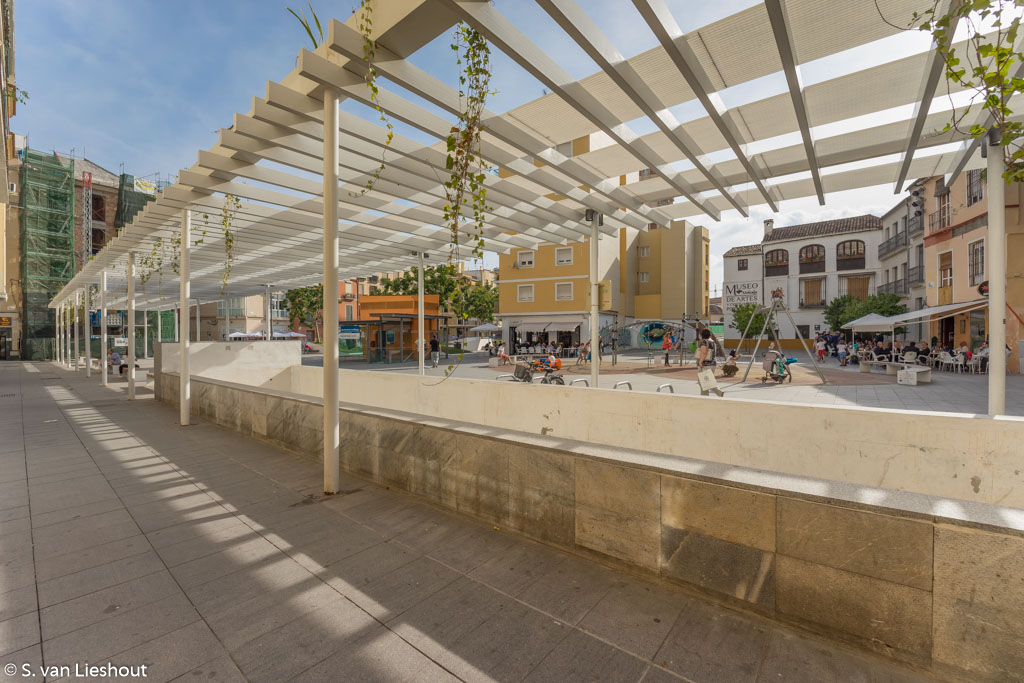 Links in this article

Disclosure: Bear in mind that some links in this post are affiliate links and if you go through them to make a purchase I will earn a commission. The decision is yours, and whether you decide to buy something is completely up to you. Do visit my webshop
error: