Huelva, a province in the southwest of Andalusia, is one of my favourite spots in Spain. An ancient culture combined with kilometres of white sandy beaches and gorgeous corners of unspoilt scenery makes this a star attraction for nature lovers. Moreover, the region is off the beaten track, thus mostly undiscovered by mass tourism. Even the Spanish refer to this region as ‘La España profunda’, the real Spain.

Huelva is not the place to go for a city break. On the other hand, if you are interested in excellent wines, bird watching, mountain sports, golf, surfing and Jamon Iberico, you will find all of this in abundance in Huelva. A third of the land is either a national park or otherwise protected by law, therefore making Huelva an ideal destination for the great outdoors. To explore the province, you need at least a week and preferably a car.

The province consists of several regions, the most important ones are:

Doñana Park is a protected area, a magical place. It stretches over the two provinces of Seville and Huelva. With more than fifty thousand hectares of spectacular scenery; including marshes, lagoons, beaches, forests and rivers, which form the breeding grounds for hundreds of bird species, the endangered Iberian lynx, deer and wild boar.

In the middle of the park is El Rocío, the best-kept secret of Andalusia. A place that has no paved roads, but has plenty of places to tie up your horse while enjoying a drink at a local pub. From El Rocio, you can take several excursions into the park, either by horse, 4WD, boat or on foot.

El Rocio is also the final destination of the largest Romería (pilgrimage) in Spain. Every year more than one million pilgrims participate in this event, most of those travel on horseback. The tradition has existed since the year 1653.

Matalascañas is the regional beach resort, with seven kilometres of sandy beaches and restaurants. If you want a quieter place, look north for the breathtakingly beautiful Asperillo beach with massive dunes. This little piece of heaven is located ten kilometres to the north (towards Huelva) of Matalascañas.

Even though the best part of the year this region is quiet, in the summer months, especially on weekends, expect traffic jams from the city of Huelva towards the coast, as locals are trying to escape the city heat. Plan your visit in the usually mild autumn, and you will find most of the waterfront deserted.

If you are more into the pleasures of Bacchus, than you are also in the right place as the province of Huelva has been producing wine for more than a thousand years. The Tourist Office gladly assists you in experiencing Huelva through a wine tour. Yes, the grape drink is the main ingredient of this tour; but bulls, horses, nature, landmarks and local cuisine are the enjoyable incidentals.

The route starts with a visit to a wine centre – Centro del vino Condado de Huelva in the village of Bollullos Par Condado on the Calle San José 2 – followed by a visit to one of the many bodegas. I visited Contreras Ruiz, a hundred-year-old wine cellar, where traditions are passed on from father to son. Almost a century later, the bodega still produces wine with the harvest of 1918. 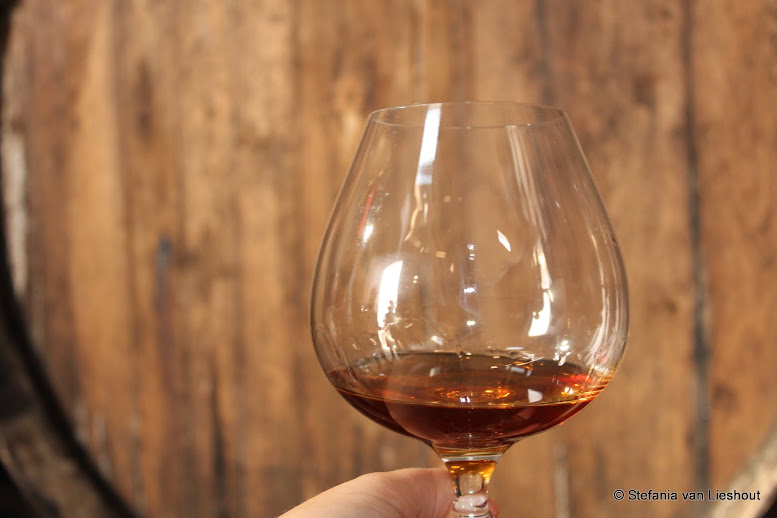 1918 wine from the Doñana region

To go even further back in time, call on Palos de la Frontera, a village just below Huelva. Here is the Carabelas yard. From this place, Christopher Columbus ultimately departed on his famous expedition to find a sea route to Asia.

In the yard are replicas of the three ships that Columbus took first to the Americas, the Pinta, the Niña and the Santa María. In the museum are various accessories (replicas) on display and explanatory videos in English and Spanish. It includes a fun and educational tour for children.

Columbus is buried in the Seville Cathedral. 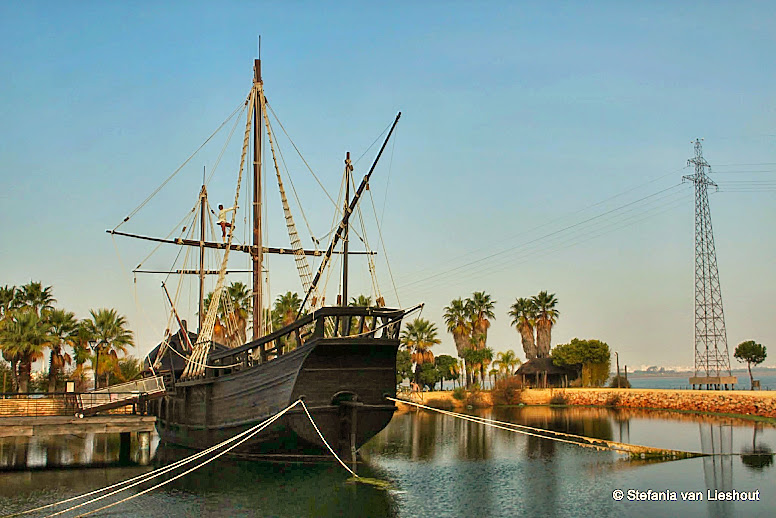 On the east side of the Guadiana river, located between mountains and the coast you will find the Andévalo region. The Guadiana is the natural border between Portugal and Spain. In the north of this region, you’ll find the Rio Tinto mines. 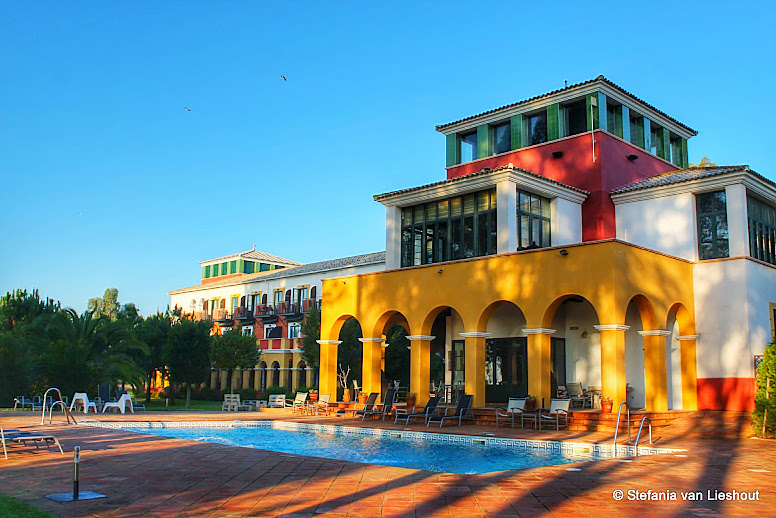 Ayamonte, a small border town has only twenty thousand inhabitants. The city has a picturesque pedestrian medieval centre, a port where the ferry departs for Portugal and is the base for Isla Canela. 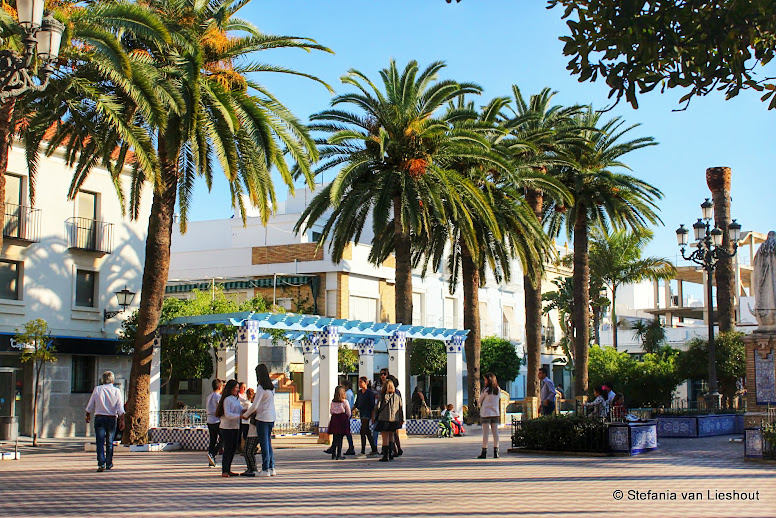 During my last visit, I stayed at the**** Hotel Isla Canela Golf. A beautiful resort with wooden floors, decorated in an eclectic style with Arabian and Asian influences. The friendly staff speak surprisingly good English, which in this part of the world, is still a small miracle.

The guests are mostly a middle-aged crowd from northern and western Europe, the type that still dresses for dinner. The rooms are tastefully decorated, with a view of the golf course. Unfortunately, the walls are rather thin, so it is probably not suited for your romantic getaway. 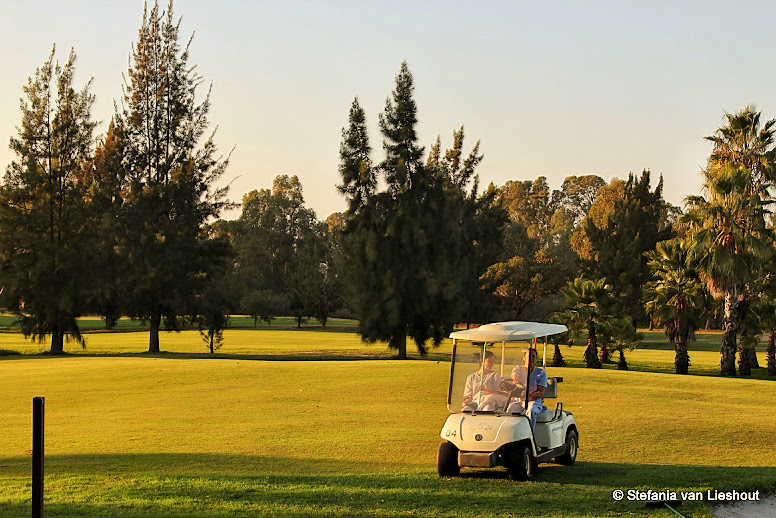 The hotel is located between the 17th and 18th hole, i.e. an excellent base for a round of golf or two. A few kilometres from the hotel are endless white sandy beaches and a promenade with several restaurants. During our stay in November, it was unusually quiet. I suppose it is a lot busier in summer. 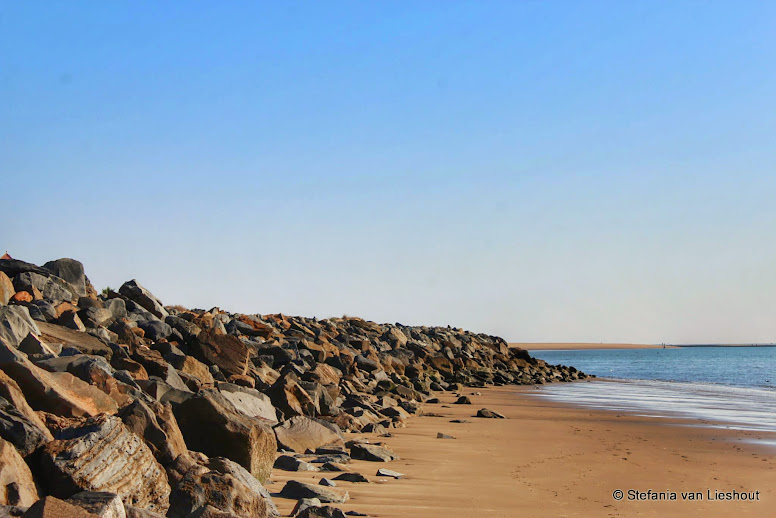 The beach near Ayamonte

You can park your car near the beach, or you can rent a bike. On the ferry to Portugal

Portugal, on the border with Huelva

You can take a bicycle on the ferry which crosses over to Portuguese Algarve. The ferry runs every hour (till 19.00 hours) from the Spanish port of Ayamonte to Vila Real de Santo Antonio in Portugal. A single ticket costs € 1.55 per person and for the bike you have to pay € 1.15.

Once on the other side, you will find a beautiful little town. From Vila Real de Santo Antonio it is a few kilometres cycling to picturesque Castro Marim, which has two castles. 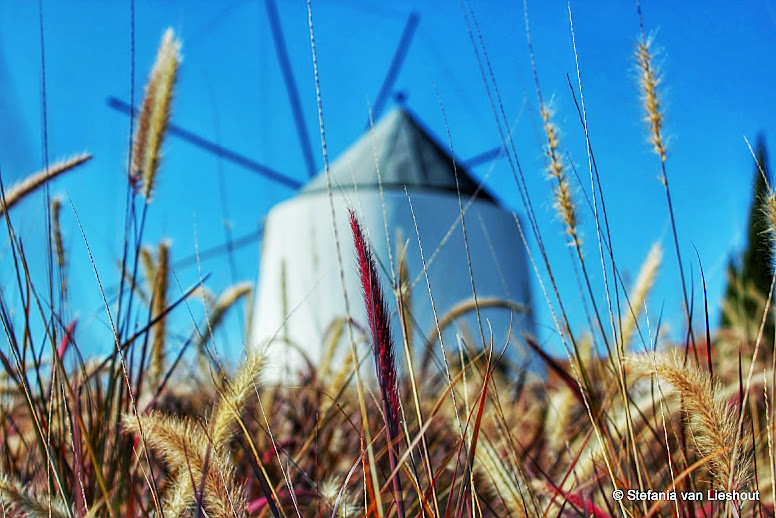 Near the northeastern border of the province of Huelva, a bizarre moonscape appears. The site was created by a joint effort between nature and man. The minerals, iron and copper, in the Rio Tinto, or Red River, produced the typical colour, miners did sculpting of the landscape.

A visit to the Rio Tinto mining complex will take you the best part of a day: the museum, the mines and the railroad can also be visited separately. The ride in a vintage train takes approximately one and a half hours.

For more information, see the website of the park.

In the extreme west of the Sierra Morena Mountains, in the north of the province of Huelva,  the Sierra de Aracena y Picos de Aroche and Sierra Pelada y Ribera del Asserrador form together 200,000 hectares of nature. Huelva peaks here at 962 metres on the Cerro del Castaño.

The area has extensive forests, high rainfall, a mild climate and a distinctive cultural heritage (including Alajar). The vegetation consists of cork oaks, chestnuts and holm oaks. Along the river, you will find the popular, willow and alder. Common birds are vultures and black storks.

The mountainous terrain is perfect for all kinds of mountain sports: hiking, via Ferrata, spelunking, rock climbing and horseback riding. Visit andalusia.org for information in English.

The Gruta de las Maravillas in the town of Aracena is a complex of caves with underwater lakes. During weekends and holidays, it attracts hordes of tourists.

In the caves, it is forbidden to take pictures. The cave is in the centre of the town of Aracena, in the north of the province of Huelva. Access is via the N – 433 roads from Seville or Portugal and the N – 435 from Extremadura or the same N – 435 of Huelva.

We slept at Posada San Marcos in Alajar. The ecologically-built hotel has a pool and charming rooms. A British/Spanish couple, Lucy and Angel own the place. During our stay, we were served tasty food, including a casserole of cerdo Iberico with pepper, rosemary with a surprisingly delicious chocolate sauce. This article is a compilation of several visits to the province of Huelva and Seville. Three trips (of seven) were sponsored (transport, accommodation, tours, food) by the province of Huelva, Seville province and the organisation Andalusian Wilderness. I slept in all recommended (affiliate links) overnight accommodations. The hotels/campsites have their qualities in terms of location, quality and atmosphere.

Hotel Fuerte El Rompido (not visited) was one of the sponsors of my last trip to Huelva.

Disclosure: Bear in mind that some links in this post are affiliate links and if you go through them to make a purchase I will earn a commission. The decision is yours, and whether you decide to buy something is completely up to you. Do visit my webshop

new in my webshop